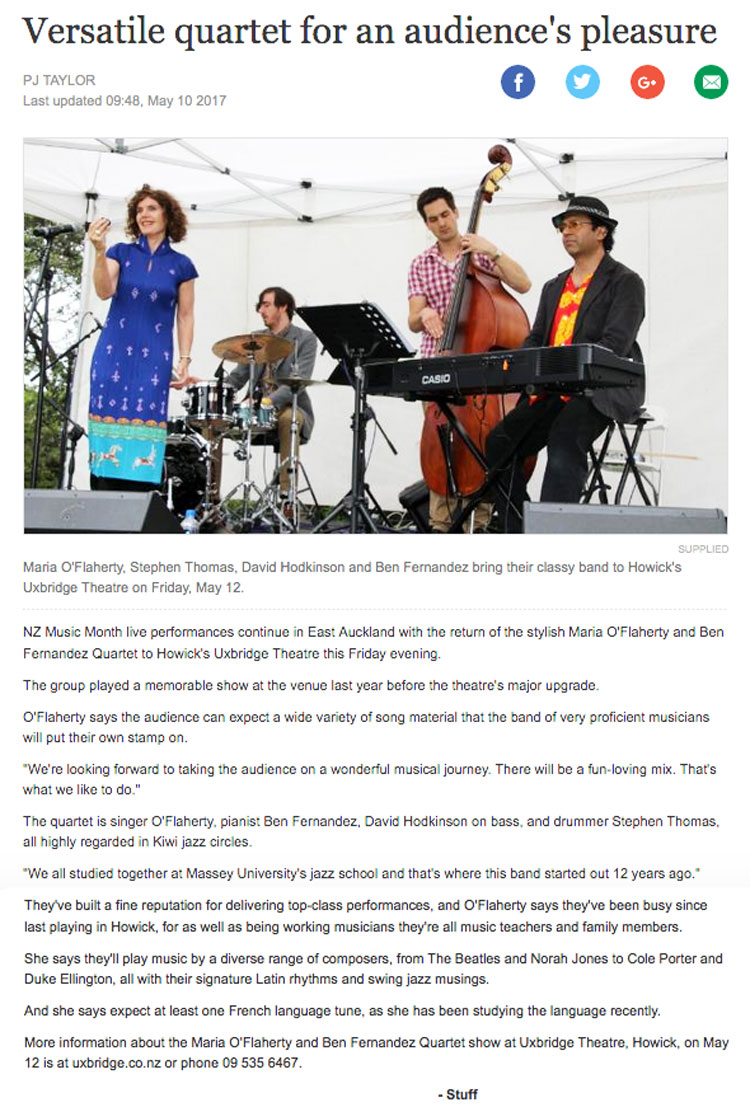 IRISH EYES: Are smiling whenever Maria O’Flaherty takes the microphone. She sings with her and Ben Fernandez’s Quartet at Howick’s Uxbridge Centre for Arts and Culture this Saturday.

Quartet in world of its own. By PJ Taylor

Musicians are inspired by all that has gone before, and when it comes to World Music that’s pretty much all encompassing – positively global.

A prominent clip of the Maria O’Flaherty and Ben Fernandez Quartet on YouTube delivers an Irish melody with a traditional accent; flute; a jazz platform of piano, bass and drums; and Indian tabla (hand-finger drums), expertly played.

When O’Flaherty picks up the phone for our interview, an Irish accent is expected. She sounds Kiwi through and through however, saying the group are popular regulars at festivals, especially with food and wine in the great outdoors.

And as thoroughly enjoyable as they are, O’Flaherty says they fully appreciate being the sole focus of attention, rather than being a part player in a culinary-entertainment experience.

“We love playing at concerts, where the audience is sitting and listening intently to what you’re doing.”

She’s fully aware of the “great room” that is the performance venue reputation of the refurbishing theatre at Howick’s Uxbridge Centre for Arts and Culture, and can’t wait to play there with her bandmates this Saturday evening, February 20.

“We have a wonderful pool of musicians. It’s very special being able to connect musically with great buddies. I feel so blessed.”

So, they’re on the same planet, and in another demonstration of how worldly they are, O’Flaherty says the repertoire possesses songs sung in the languages of English, Spanish, French, and Portuguese.

“I’m happiest when I’m at Womad,” says O’Flaherty, of the British-born World of Music Arts and Dance festival that’s staged in New Zealand each year in New Plymouth, and is on next month.

“It’s amazing to hear the lyrics, melodies and beats of the Latin world and Africa, music from all over the place. I listen to everything.”

The first generation Kiwi with obvious Irish roots, her parents were from the old country and her Dad “was always singing Irish songs”, while her mother “encouraged me to get music lessons” from an early age, when she grew up across the Tamaki River in Glen Innes. The sacred turf of Dave Dobbyn, the Finns and the Chunns.

From that Gaelic foundation, O’Flaherty broadened her musical horizons studying at Massey University, Albany, and then singing in a prestigious a cappella choir.

Her collaborators in the Maria O’Flaherty and Ben Fernandez Quartet are some of the country’s leading players in their fields. They’re all full-time professional musicians and teachers, trained and groomed at university.

The line-up this Saturday is O’Flaherty on vocals, Fernandez on piano, David Hodkinson on bass and Jason Orme on drums.

She says the two sets will include “a great selection” of jazz standards presented in their own fresh, defined styles; a little Irish, and blues – “because everyone loves the blues… and everyone is showcased”.

And as influenced as she is by the wider world, O’Flaherty’s personal musical favorites are rooted in the classics: “The women singers Billie Holliday, Ella Fitzgerald, Peggy Lee, Sarah Vaughan and Anita O’Day, and the music of Miles Davis, Horace Silver and Joni Mitchell.”

The group played a memorable show at the venue last year before the theatre’s major upgrade.

O’Flaherty says the audience can expect a wide variety of song material that the band of very proficient musicians will put their own stamp on.

“We’re looking forward to taking the audience on a wonderful musical journey. There will be a fun-loving mix. That’s what we like to do.”

“We all studied together at Massey University’s jazz school and that’s where this band started out 12 years ago.”

They’ve built a fine reputation for delivering top-class performances, and O’Flaherty says they’ve been busy since last playing in Howick, for as well as being working musicians they’re all music teachers and family members.

She says they’ll play music by a diverse range of composers, from The Beatles and Norah Jones to Cole Porter and Duke Ellington, all with their signature Latin rhythms and swing jazz musings.

And she says expect at least one French language tune, as she has been studying the language recently.”